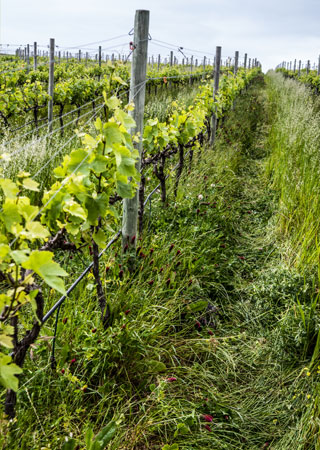 Budding was even and successful with higher than usual early Spring temperatures, but an unusually wet November and a cool December effected flowering and fruit-set, resulting in particularly low yields – far lower than our already low yields. The berries were smaller and the bunches were lighter, but the resulting wines were deeper, fuller and more structured.

December and January were drier than average, making for relatively easy and successful disease control organically, with February only very slightly wetter than our long term average. The average of the maximum temperatures for Dec, Jan, Feb, Mar was lower than our long-term average of 25 Centigrade, making 2018 a relatively cool vintage – cooler than 2015, 2016 and 2017. A warmer than average February, combined with the very low yields and small berries did however contribute to the riper more opulent style of 2018 compared to 2017.